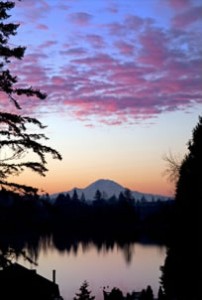 The Miracle on Mount Rainier

The day of Susanne’s memorial service on Saturday October 7th God shook  Mount Rainier at 7:48 pm.  We had asked God for a sign but until, Thursday December 7th, we never knew that his had occurred.  There has not been a notable quake on the mountain for two years.

The week before December 7th, I had bought Susanne’s mother, Sue, a 1.12 ct. princess cut diamond ring to mark something spectacular that she could always remember Susanne by.  I decided not to give it to her for Christmas because I wanted it be more than that.  On that Thursday I had lunch with, Dustin Prater, a former colleague and he told me about an earthquake on Mt. Rainier right around the time of Susanne’s passing, but he said he would research it to find out what day it happened.  To that was significant because Susanne had climbed Mt. Rainier twice.

Anyway I made reservations at a nice restaurant on the Tacoma waterfront and I gave Sue the ring that evening.  After dinner when we got home I looked up on the internet and found the site I have linked here.

I asked God if this was a sign the following morning and He said to look at the numbers.  When I looked at the numbers my eyes went to the wrong line and I read the time from a quake on St. Helens on October 21st at 3:13.  I searched the Bible and was led quite miraculous to the book of Mark.  I began in the Old Testamant looking for 3:13, half way through I noticed that my computer had gone to the book of Mark.  I thought maybe I was suppose to be in the book of Mark so I read, Mark 3:13,  “Jesus went up on a mountainside and called to him those he wanted, and they came to him.”  I called my sister and I called Tony, but before I called too many people I decided to make sure of the time.  When I double checked it and realized I had read one line up on the page my heart sank.

The earthquake on Rainier happened at 7:48 on 10/7.  I began a search for a verse in the Bible with the numbers 7:48 but was found nothing.  I called Tony and explained what had happened and he said, “Well, you were still drawn to that verse, Don’t worry, God will tell you the significance of 7:48.

The number 748 is very significant to us and we hope it gives all of you peace as well to know that Susanne was delivered into heaven.  I knew she was but to hear God tell it to me in this way is incredible.

It is also very significant that our God is a God of numbers and detail.  He waited for the exact date for me to give Sue this ring that coincided two months to the day with the miracle on Mount Rainier.  There are no coincidences in life only deep hidden reasons that we have to ask God to explain.  He likes it that way…

In the weeks to follow the words from God kept hitting me to Look at the numbers.  When I went back to the website I discovered that the last earthquake on Mt. Rainier happened in 2004 on November 7th.  Quite a coincidence that I had those three dates of 10/7, 11/7 and 12/7 and even more interesting that those three sevens add up to 21 which was the day the St. Helens earthquake occurring at 3:13.

If you need one more sign to be convinced then here is one for you.  On November 7th, 2004 the earthquake occurred at 11:23 am.  See what Jesus had to say about faith going back to the book of Mark chapter 11 verse 23.

22″Have faith in God,” Jesus answered. 23“I tell you the truth, if anyone says to this mountain, ‘Go, throw yourself into the sea,’ and does not doubt in his heart but believes that what he says will happen, it will be done for him.

I always knew that Susanne had the faith to move a mountain and now I see how God has moved Rainier twice and St. Helens once just to mark the passing of something spectacular.  These passages from the book of Mark have left an indelible and permanent mark on our faith and our family.  For what is a sign but sign post or a marker, and what other book of the Bible would someone go to look for a mark?

This miracle didn’t happen for Susanne, but God created it for our peace and for you also so that you might gain a greater foothold on your faith and be able to see God’s footprint by this undeniable miracle. 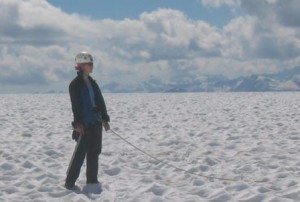 And God saved the best for last on Christmas morning 2006.  When I woke up I began to think of the number 748 in a different way.  The night before I told my sister, Pam, after she told me that 11:23 adds up to seven, that Susanne’s name has seven letters, and I realized that 3:13 also adds up to seven.  On Christmas morning I began to tackle the puzzle of 748.  If Susanne was seven letters, I began to try to I explain the numbers.  At first I thought it had something to do with Susanne in Paradise since that word had eight letters.  I tried to think of a four letter verb that would describe Susanne in Paradise.  I went through the alphabet looking for a four letter verb until I got to “N” and I said Susanne Neil and then I counted the letters in Scaringi.  That is what 748 means.  God Delivered Her: Susanne Neil Scaringi.

So for those who think this is a stretch, this is not for you.  But for those who see the miracle this is one more to ponder.  When I began to look at the diamond ring and the numbers I realized it had significance as well.  The color of the diamond is “G” on the color grade.  The “G’ is the seventh letter in the alphabet.  It is a 1.12 Ct. diamond, 1+1+2 = 4.  And the diamond is a princess cut with four sides, but actually there are eight distinct cuts on the face.  Just one more example that God is in this from the beginning to the end.

This does not take away the pain of losing a bright and beautiful daughter who had the world by the tail and who was on the verge of starting a family.  But it gives us peace knowing that it was part of God’s plan to take her into eternity with him.  Who are we to question God when he has infinite knowledge.  Our place is not to question, but to trust, and by our trust we are blocked from our anger.  Not to say that our family doesn’t experience anguish every day, but we refuse to blame God for any wrongdoing.

While Job was still speaking, yet another messenger came and said, “Your sons and daughters were feasting and drinking wine at the oldest brother’s house,  when suddenly a mighty wind swept in from the desert and struck the four corners of the house. It collapsed on them and they are dead, and I am the only one who has escaped to tell you!”

At this, Job got up and tore his robe and shaved his head. Then he fell to the ground in worship 21 and said:
“Naked I came from my mother’s womb,
and naked I will depart.
The LORD gave and the LORD has taken away;
may the name of the LORD be praised. ”

In all this, Job did not sin by accusing God of wrongdoing.